What’s Inside the Ultra-Portable Rotor System?

If you are curious about what’s under the covers of the Ultra-Portable Rotor System Model 12PR1A but don’t want to open the enclosures voiding your 1 year limited warrant, read on.  You might wonder why we would discuss the inner workings of the device and give away design specifics?  Well we really aren’t as you can always open yours up and look inside.  A large number of Amateur Radio hobbyists have the skills to home-brew such a device, but the time required to do so is large; building a one-of device is expensive, and there are better ways to spend your time and money.  When you are done with designing, building and software development you will have spent many more times the money building your own, not counting the many hours developing the software, circuit, PCBs and mechanical structure.  I know, that’s how this product started.

The ultimate design goal of this product was to develop a very light weight Rotor System that has features of those found in large permanent rotor systems.  In doing this we had to reduce system complexity by changing the way the system kept track of antenna heading and use an embedded microcontroller to manage its operation.

The 12PR1A consists of the Mast Top Rotor Unit and the Hand Held Controller.  Also provided is a 50 Foot 4 Conductor cable with mating connectors used to interconnect the Controller and the Rotor unit, and some accessories to make the install easier.

Starting with the Rotor unit:  Under the non-structural plastic box the mechanical structure is found.  The motor assembly is a 12 volt DC Motor and gear reduction unit produce 30 RPM.  The little motor produces a surprising amount of torque for its minimal size and power requirements.  The output turns a custom made worm and matching worm gear that further reduces the motor output by 30 times, providing a 1 RPM output with a lot of torque. 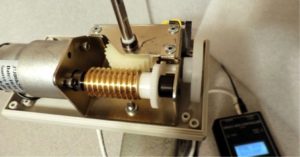 Antenna heading is tracked by the microcontroller within the Hand Held Controller using pulses generated by a timing wheel rotating over an encapsulated reed switch.  The structure of the Rotor Unit is provided by a laser cut and precision bent 1 piece steal frame which holds the bearings and mounting hardware.

The Hand Held Controller is built around an 8-Bit industrial class microcontroller (sorry no Arduinos found here).   Inside the custom made aluminum enclosure is a single circuit board holding all the electronics needed to perform the functions of the system.  The electrical design has been reduced in complexity over other designs by using a pulse counting technique to track the antenna position, moving much of the mechanical complexity into the operating code that the microcontroller uses. 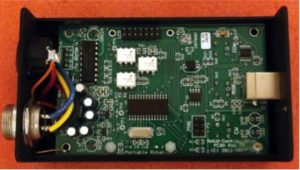 The circuit is relatively simple, consisting of power regulation, analog driver and signal conditioning, and the digital section supporting an external I2C Flash memory, a small LCD screen, 3 buttons and 2 LEDs.  Much attention was put into the design for reducing inductive noise generated by using PWM to control the remote motor.  Separate ground planes, power filtering, single point grounds, and optical isolation were used to mediate the problems that arise from inductive motor noise.  The LCD, LEDs and buttons are mounted on the back side of the PCB with all other components mounted on the top side.

The firmware, written in ‘C’ is where the real features of the System are brought out and where the most time was spent in the development of the Rotor System, and those details we are not willing to share.

Leave your thought Click here to cancel the reply